Letter #44 To My Benefactor

I’ve been a bad girl. I have not hiked since November when I conquered the Waihe Ridge Trail in Maui. I told you all about it in my last letter to you.

You see, I’ve been super sad. My uncle has Stage IV lung cancer. It happened super fast. In fact, I just told you—only four letters ago—about him. I had no idea at the time of how sick he was. Neither did he.

In June, he left on a long road trip to mourn the loss of his beloved wife so I wrote him a smushy Father’s Day card (no, he is not my father, but that is a story for another day) telling him how much I loved him the day before he left.

He ended up in the emergency room coughing up blood while he was in eastern Canada, and they diagnosed him on the spot right there during his “vacation.” What the heck???

In that smushy letter, I had told Uncle John that I really missed Aunt Ann and planned on planting yellow roses on Memorial Day which, incidentally, was the actual day of her death, and now here he was, fighting for his own life.

I don’t want to plant all kinds of roses in honor of her and him. I want to sit in the yard with him and admire the many yellow roses that I already have in the garden which remind me of Aunt Ann. We would have peppermint tea (which is his favorite) and I would try to crack him up with my jokes so he could snort and say, “Cut it out!” in that distinctive voice of his.

So, you see why I have not been hiking. I will get back to it, I promise. For now, I’m trying to spend every precious moment I can with Uncle John while he is still around. Letter #52 To My Benefactor 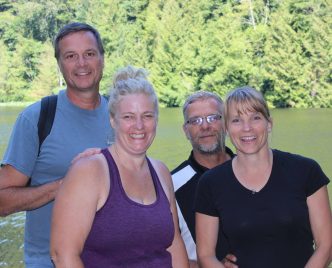 Letter #51 To My Benefactor Letter #50 To My Benefactor Letter #49 To My Benefactor